reast cancer survivor Bonnie Walls talks about her experience of being diagnosed with breast cancer, her treatment, including her decision to have a mastectomy and how her husband Gary has been there by her side throughout her journey with cancer.

Bonnie was first diagnosed with cancer in 2008. Even though she had detected a lump on her breast, Bonnie recalls she postponed visiting her primary physician because she was terrified that the lump on her breast would be cancer. “Waiting those few months probably did me more harm,” she says. “Giving the cancer time to travel into my lymph nodes.”

Fighting Depression
For Bonnie, depression was one of the big side effects of her cancer diagnosis and treatment. Following a mammogram, Bonnie’s suspicions were confirmed. She had breast cancer. Then the shock of her diagnosis settled in. “The depression hit, but I really didn’t realize it. I was sad,” she says. “When you’re told you have cancer, I thought I was immediately going to die, as if I only had a few months.”

Bonnie honestly didn’t think she would see spring. “And then, low and behold, spring came,” she says. But yet she was still depressed. The shock of her diagnosis still lingered. “The chemicals in my brain just weren’t balancing right. She decided to take some medication to help with her depression and it helped.

“It can be a long struggle,” Bonnie’s husband Gary mentions. “But there’s a light at the end of it.” Gary recalls meeting many couples who come in together for the chemotherapy treatments and how the diagnosis and treatment affect both the wife and the husband. “You can see the shock in both the wife and the husband,” he recalls. “The husband goes through a lot of things too.”

Gary recalls how he and Bonnie will often try to talk to and help other couples. “Give it a year and things could be different in a year,” he says. “You don’t think there’s a tomorrow, but they’ve got so many new medicines and research now.”

Fatigue
Besides depression, Bonnie found fatigue to be a difficult side effect from her chemotherapy treatments. “I never realized how bad it was until I was going through chemotherapy,” Bonnie recalls. “I’ve never felt so badly with the flu or anything else, compared to that.” It became a big job for Bonnie just to do simple tasks. “To bathe, use your arms to shampoo your bald head (laughs). It was so much work.”

Loss of Appetite
Bonnie also remembers forgetting to eat and drink. “Had my husband not been there, I would have forgotten to really eat and drink,” she says. “I’ve been dehydrated a couple of times, but you just forget.” For Bonnie’s appetite, it did not help that she felt like she had a mouthful of sand. “Actually, it doesn’t feel like you’re eating sand, really, you don’t have that grit,” she recalls. “It just feels like you do. Eating was sometimes a problem, because I would forget.” 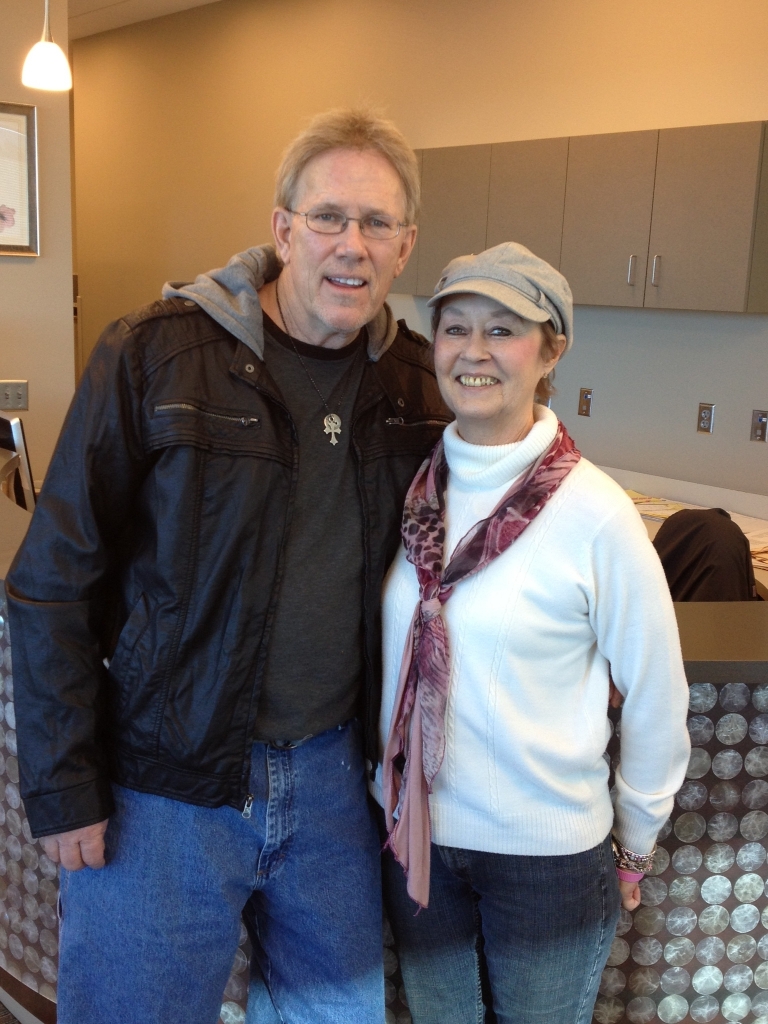 A Heads Up On Side Effects
Bonnie is quick to mention that she was given a very thorough list of what to expect from any possible side effects from her chemotherapy. “They go over them and list all the possible side effects, so you’re aware of what’s going on,” she says. “I knew that this was possible, that this could be happening. But I always got a heads up, as they let their patients know what could happen throughout the treatment.”

Throughout her chemotherapy, it gradually became easier for Bonnie. “I don’t want to scare anyone from chemotherapy, because you can make it through it”, Bonnie says. “Just keep fighting and do what your doctors tell you to do.”

“You’ve got the hope in that chair,” she mentions. “You can watch every drop that comes down from the chemo. It’s like come on, get in there!” In fact, on some of her chemo days, Bonnie recalls not wanting to stop taking her chemotherapy. “I liked my chemo. It was making me better. My side effects, I’ll deal with those, but it was working for me,” she points out. “Like a vitamin a day,” adds Gary. 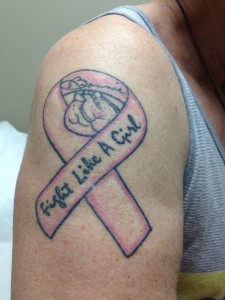 Knowing what she knows now about her experience with breast cancer, Bonnie is big proponent of early detection and getting regular mammograms. Bonnie realizes how important it is for women to be aware of their bodies and any changes. Both Bonnie and Gary designed their own tattoos regarding breast cancer. “To us they mean a lot, especially if it catches someone’s eye and if it makes them think about going and getting a mammogram,” Bonnie adds. “Early detection is so important.”

The Power of Breast Cancer Awareness
In regards to breast cancer awareness, Gary mentions how many more people are now doing their part to help the cause. During a football game in October, Gary and Bonnie’s grandson placed a pink ribbon on his helmet, wore pink stockings, shoe laces and wrist bands. “All the other kids were like, what in the world are you doing, boy?” Gary says. “And he says, ‘that’s for my Grandma’.”

Bonnie acknowledges that cancer really does affect everyone is some respect. “Love ones, your friends and your co-workers, it affects a lot of people. A chain reaction.”

Bonnie recalls how her perspective towards her cancer diagnosis changed over time. “When I was first diagnosed, there’s that shock to your system,” she says. “But you can do it. You can make it.”