My Journey Through Stage 3 Hodgkin Lymphoma

When a chronic cough wouldn’t go away, Steve Arquitte didn’t think much about it. It was early April and spring was in bloom. He attributed his cough to allergies. “You just have a cough, so you just ignore it,” he says. “It’ll go away once out of season.”

In May his coughing continued, but now he was throwing up, as he was coughing so much. He went to his primary doctor, who also thought he was having allergy related symptoms, offering Steve steroids to help provide some relief. The steroids seemed to help, until they wore off and then Steve felt exhausted..

The Hodgkin’s Lymphoma Diagnosis
Not knowing what was going on, Steve’s doctor sent him to an infectious disease doctor, who also tried various remedies, but nothing seemed to help. After three weeks of this, and still coughing, the doctor took a blood test. When the results arrived, Steve received a call at his work. He learned that his blood count numbers were completely off and was told get himself to a hospital.

At the time of the call, Steve was in the break room and needed to have one of his co-workers help him down the stairs, so that his wife could get him to the hospital, where he was met by Doctor , who told him that he had Hodgkin’s Lymphoma stage 3b. How could that be? Steve was stunned. He was only thirty-one at the time and now he was diagnosed with cancer.

“It had just started with a cough,” he remembers. “It wasn’t anything, there wasn’t a bump, it was just a cough.”

Going Through Lymphoma Cancer Treatment
Steve began his cancer treatment with a more aggressive regime of chemotherapy but after only a couple of treatments he began coming down with quite a few side effects.

Besides hair loss, which is fairly common, his side effects from the initial treatment included bad skin rashes and blood clots, where two occurred in his leg and one in his lung. From the list of possible side effects Steve could receive, Steve figured he’d already hit about three-fourths of them. And that’s when his treatment was changed.”Fortunately with cancer, sometimes it’s trial and error. You don’t know what’s going to work on everybody,” he says. 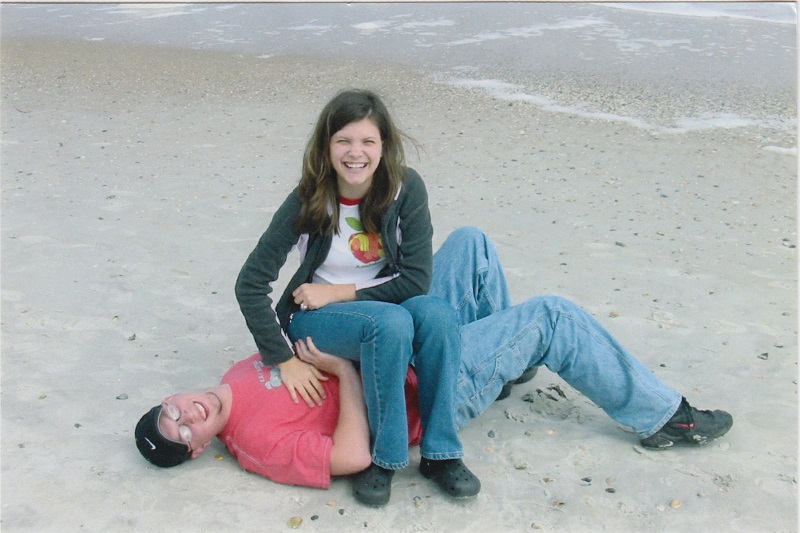 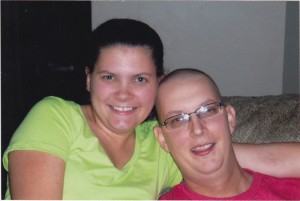 Because of his bad side effects, Steve was switched over to a ABVD chemotherapy regimen that involved the chemotherapy drugs Adriamycin, Bleomycin, Vinblastine, and Dacarbazine. This was the treatment that worked for Steve and he remembers that many of his side effects began to go away.

The only side affect that came with the new treatment was an increased heart rate. “I actually started growing hair back. The only thing that would happen is my heart rate would go up to like 220, after I would have the ABVD chemo,” Steve recalls. “I’d leave treatment Friday, get some sleep on Friday, for about four hours. And then the steroids that they give you when you’re going through chemotherapy would kick in and I’d be up till Monday. Then I’d finally get to sleep. And then Tuesday, my heart would be going 220.”And I’d come in here and they’d give me some fluids and it’d go back down, because I’d be dehydrated no matter how much water I drank. But that’s the only thing that happened.”

Getting Through Treatment – Support from Family
Steve recalls needing to rely heavily on his wife and family to help him get through his cancer treatment. “She probably worked twice as hard while I was sick, because I couldn’t do much,” he says. 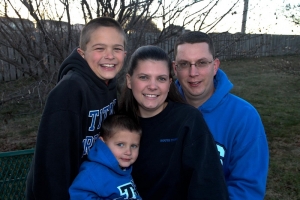 ”She had to go to work and she had to take care of the kids.” While Steve could spend time with his kids, there were a lot things that he just couldn’t do, like play with his kids in the cold, because he couldn’t risk getting a cold with his weakened immune system. “So she took on a lot of everything until I was better,” he says.

Finding Support from Other Cancer Patients Helped a Lot
“It was a little weird being the youngest guy,” Steve recalls of his experience in the chemo room. ”I remember being in there my first time and being scared. And people would joke and talk with me

and they really, really helped. And then you do the same for the next person that comes in that’s never done it before. You really do get to know those people you sit with.” Steve found it very helpful to be able to talk with other patients, as they all had something in common: They were all trying to get through their cancer treatments. Other patients knew what it was like to be going through treatment, especially since many were experiencing the same types of side effects, worries or frustrations. “You have your family. They’re there to support you. They love you,” Steve explains. “They try to help you, but they’re not going through it, so they don’t know. Those people in that (chemo) room become really close to you in a short period of time, because you get to talk and about what’s happening. You all have cancer. You all figure it out together.” Steve was very thankful for that support, adding “”When you’re in that room getting chemotherapy, you’re in a room full of people, that all have one thing in common. And you talk about it. And it’s therapy.”

Life After Cancer – It Takes Time
Steve says he feels good now, but that he still has bouts where he runs out of energy. “Sometimes you’ll be great, your energy will be great. You’ll feel like you’ve built back up your energy,” he says. “And then all of a sudden you’ll hit your wall and you just need to remember that that’s part of it.No matter how far out you think you are, and that I should be better, you got to remember that we poisoned my body for the better part of a year. It just takes time.”

As Steve continues on his road to recovery from cancer, he remains philosophical and puts his journey with it into perspective. “It takes awhile to get back to normal, and you might not ever be exactly the same, which is okay. I’m still alive, you know. There’s that,” he says with a chuckle.