Growing up, Omaha native Mike Hatfield had two loves: Music and basketball. He started playing hoops when he was ten and always was able to keep that as part of his life. He also
became a well-known musician, playing guitar and singing as a front man for numerous bands, from the sixties and into the ’80’s,

But when Mike was diagnosed with laryngeal cancer, or larynx cancer, he lost one his loves, his ability to sing, and was told by one doctor that he would also never play basketball again. Fortunately, Mike’s journey with cancer ended with a happy swish and he also picked up a new love along the way: his faith.

The Laryngeal Cancer Diagnosis
At first Mike thought that he just had a bad cold that wouldn’t go away. He was experiencing on-going hoarseness, as well as a sore throat. He thought he was just fighting the symptoms of a bad
cold. But when he felt like the symptoms were beginning to change his personality that’s whenMike realized he he might not be dealing with just a cold

“I started getting mean,” he recalls. “And I’ve never been mean to my sister before,” he said. Suddenly we was irritable and was getting into big arguments with his beloved sister Shirley. It was then that a long-time friend urged Mike to go see a doctor regarding his symptoms, telling him that his wheeziness wasn’t good and that it seemed to be getting worse.

After meeting with doctors and having tests taken, Mike remembers meeting with a specialist who performed a direct laryngoscopy, where a thin tube is inserted through the nose to look at
the larynx and nearby areas.

Mike was told that he had throat cancer,laryngeal cancer specifically, and that his tumors were large. “He told me that it was wrapped around my voice box like two snakes,” Mike recall and he learned that his cancer was a stage four diagnosis and that his options were limited. He could undergo surgery to remove his entire larynx, which Mike didn’t want. “If you don’t take care of it now, you’re going to go to sleep and you’re not going to wake up, because it’s going to shut your breathing off,” Mike recalls his doctor telling him. 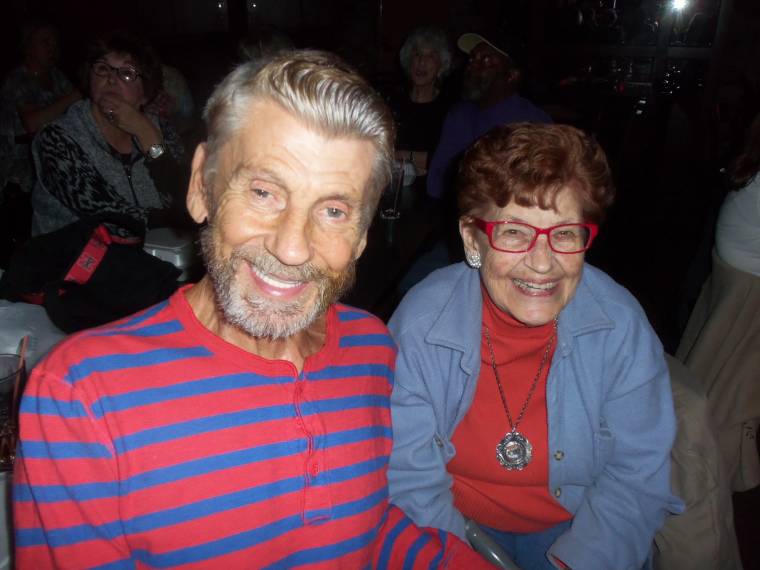 It was then that Mike remembers his doctor looking at him and asking him, “You’re not going to die, do you believe that?” Mike said that he wanted to believe that. “No, no,no. Do you
BELIEVE that?.” “I guess so,” Mike said. “Well, we’ll take that. Tomorrow you’ll start your treatment, Michael.” Mike was to undergo a cancer treatment plan for his larynx cancer that
would involve both radiation and chemotherapy.

Anxious About the Cancer Treatments 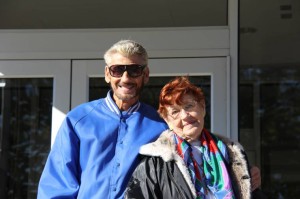 The night before he was to begin his cancer treatment, Mike remembers being anxious. “I was alone in my room and I said dear God I’ve never asked for anything in my life, but I’m
asking now, from the bottom of my heart, for my sister and my cat, don’t take me yet, because I’ve got a lot of work to do here.”

Going Through Cancer Treatment
Mike remembers that both the radiation and chemotherapy treatments began to wear him down and that he began experiencing some side effects such as weight loss and a burning pain in his throat.

“I was losing weight and they were really worried because I was a 124 pounds,” says Mike, who began taking a weight protein, which he’s continued to use since he had the cancer.
“I swear by it. And it really, really did help me. I weigh now like 163, which is a good weight for seventy-two.”

Mike recalls being a bit reserved when he first began going through his treatments because of his anxiousness of getting better and wanting to be finished with everything. “When I first came
I was really tentative. You know, kind of shying away from people. But now I got to know ’em. Wow! They’re the greatest people on Earth.”

It was a difficult time, but Mike remembers being told that his continued cancer treatments might get more difficult to tolerate. “If it’s gonna save my life, then I’m doing it. That’s why I’m doing it,” he says. “So I kept going and I kept going and I kept going. And the treatments were getting harder, cause they said they would. And, so finally on my last treatment, I remember I told my sister, I said, we’re almost done, and I’m still here. You know, why I’m here? [Motions to sky]…That’s why.

Finding his Faith
Not too long after he was diagnosed with cancer, Mike decided to join a church. “And they all prayed for me,” he recalls. “I’ve never had that happen before. They all got around me, and they put their hands on me and they said, you’re not gonna die. Then I started believing. And, boy, would I’d believe.” And Mike also realized that he might have some unfinished business. “Like the pastor told me, you have a lot of work to do down here, for other people. He’s not ready for you, Michael.

Keeping His Eye on the Rim 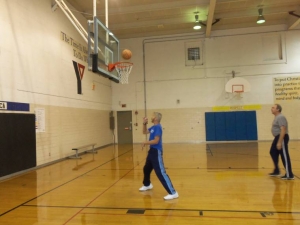 Mike remembers one doctor telling him that he probably wouldn’t be able to play basketball again, but Mike proved him wrong. “I’ve been playing since I was ten years old,

I can’t give it up now. So when they gave me back the one gift (since he couldn’t sing anymore) The one gift that I have is my ball.”

And now at the spry age of seventy-two, Mike is still playing hoops at his local YMCA. “I’m still doing it. And I’m very proud of that, because I don’t know anybody that’s seventy-two and still playing basketball. [Chuckles] I am so internally grateful to all the doctors I had. I couldn’t ask for anything more. I have a very quiet life. tranquil life, and a better life, since the Lord come into my life.

Life After Cancer
Today, Mike is now cancer free. But he says that he has plenty of unfinished work to do, including helping others, who might be going through cancer. “If I can help someone to go through what I went through and show them there is life after cancer, but you’ve got to keep believing and you’ve got to trust your doctors and they will help you.”

More Information
Read other cancer survivor stories, as well as watch their videos.