Breast Cancer Is Not a Death Sentence – Diane Rehnberg

What shocked Diane more than her diagnosis was her hair loss from the chemotherapy treatment. “One of the drugs said it would cause hair loss and the other ones didn’t”, she recalls. “So I wasn’t prepared as much, thinking that maybe it wouldn’t happen. I think that it would have been a good idea to have a wig or something in place so that I could have been more prepared for it.”

Chemotherapy, It’s Not a Horror Story
Even though Diane had to deal with her hair loss as one of the chemotherapy side effects of her cancer treatment, she says that overall going through chemo wasn’t that bad. “It’s not the horror story you used to hear. They have better drugs now to help with the nausea and all,” she says. “The big treatments I get every three weeks leave me feeling kind of nauseated and not feeling that great for about a week, but then I still have a good ten days before the next treatment rolls around, so it’s not so bad.” 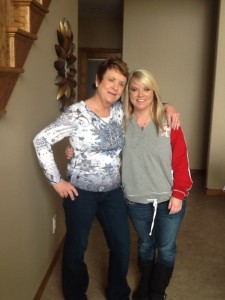 Cancer Treatment Has Come a Long Way
From the time her mother was treated for her breast cancer to the time that Diane went through her own cancer treatment, she notes that the treatments have really come a long way. “In just the short time since my mother has passed away, I see the difference and what they now know,” she says. “It’s very doable now. Just hang in there,” she urges other patients. “Take one day at a time and you can get through it. It’s not a death sentence.”