Overcoming both a lumpectomy and a mastectomy, including chemotherapy treatment, breast cancer survivor Adell Duncan talks about her stage 2 diagnosis and how her struggle with cancer opened a new perspective to her on living her life.

“A year and a half before I got cancer, my husband died unexpectedly of a form of pneumonia. I thought my life was over. And then I got cancer,” Adell recalls. “I found out life was worth living, cause I’m not ready. I’m not ready for my kids to be parentless. I wasn’t ready to give up.”

Adell says that somehow she found an inner strength to just fight, fight, fight. But she came to this conclusion one day with the help from one of her daughters.

Adell recalls what her daughter told her shortly after she was diagnosed with breast cancer. “My daughter lives with me, she was twenty-give at the time. And she gave me one day to cry. And then she said, ‘Okay, mom, make your mind up. Are we going to fight? Or are we going to give up? Because you’ve got to start today.”

Adell, who is also a nurse who works at the Norfolk cancer outreach center, started her breast cancer treatment with a lumpectomy surgery. Then, five days later, she was informed that more surgery was required to get the remaining cancer. “I told them I had to have a mastectomy,” she says. “I wasn’t going to mess around anymore. I just didn’t have the emotions to do that.”

She went ahead with the mastectomy and then met with a plastic surgeon two days a month to under go breast reconstruction surgery. And she also went through about six months of chemotherapy treatment, which were three weeks on, then one week off.

During her treatments, Adell says did have some chemotherapy side effects, which included losing all her hair and battling some nausea. Overall, she says that she did have some good luck with some of the anti-nauseates she was given. Because she’s a diabetic, Adell asked not to take steroids. Even though they would have helped boost her energy, the steriods could also raise her blood sugar level. “I chose to maybe have more nausea than other people, just because I needed to take care of my diabetes too,” Adell says with a chuckle. 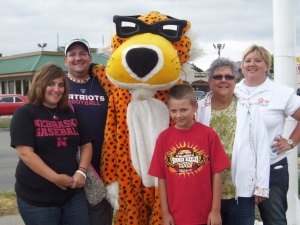 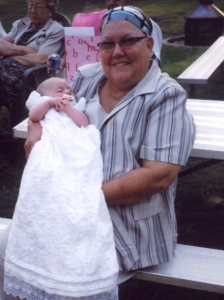 Regarding her hair loss, Adell became just as proactive. After her first treatment, Adell began to lose her hair. She had a wedding that weekend and told her daughter to call a hairdresser. “I’m shaving it off,” she recalls telling her daughter. While her daughter said that Adell still had hair, Adell remained adamant. “This is just the beginning. It’s all gonna go,” Adell explained. So we went to her hairdresser, had her head shaved, then went back home to nap, as she’d just finished another treatment. When she woke up, Adell found that her kids had gone out and bought her bandannas to match every single uniform top she owned.

“And I never did a wig,” she says. Adell always tied her head up with a bandanna to the point where she kept one on the front door. “If anybody came to the door, I could hurry up and pull it one,” she laughs. But she always made sure that her grand kids could see her without hair. “It didn’t bother me. It’s hair. Hair is not that important, health is important,” she says.

Through her entire ordeal with cancer, the diagnosis, the surgeries, the treatments and the side effects, Adell still believes that the experience has made her a better person. “You can fight this,” she says. “Even on the days that you think tomorrow is never going to come, you can get through it. There’s a whole new life out there. And it’s totally changed who I am as a nurse. I think I listen better. I think I’m more compassionate. I think I love life more.”