How I Deal with My Colon Cancer – Marlyn Halsey

How I Cope with My Colon

“It’s a shock to you that you have cancer, but I tried to keep positive”, he says when he was first diagnosed with colon cancer in 2004. He went through chemotherapy treatments for almost two years, before his cancer went into remission.

As he went through his cancer treatments, Marlyn relied on the support of his family and friends, the power of faith and on maintaining a positive attitude. “When I had the cancer the first time, I really tried to stay positive on that. And I have friends who were praying for me all the time. I really believe in that.”

He made it through his treatments without a glitch and then his cancer came back a couple of years later. Once again Marlyn remained positive and tried to stay active, but he still needed a little push. “My wife probably kept me going. She wouldn’t let me sit around and mope. She kept me busy,” he says.

During his second bout with colon cancer, Marlyn went through both chemo treatments as well as radiation therapy. “I had chemo twenty-four hours a day for six weeks. And then I had radiation Monday through Friday.” Because of the location of his tumor, his radiation treatments were carefully administered. It was a rough period for him, but he remembers how a good friend came down to visit him in Omaha, where he was going through these treatments, and helped him to stay active.

Going through his chemotherapy treatments, Marlin experienced some side effects, like some nausea, but was fortunate to void many others. “Just because they’re telling you this can happen, doesn’t mean it can happen. In my case, a lot of times, a lot of the side effects never happened.”

His cancer went into remission, only to reappear a year and a half later. “You try to stay positive. But when you know that your cancer is actually growing, it works on your mind, even though you try not to think about it”, he says.

His third round with colon cancer has not been as smooth for him as the past two. Marlin has gone through four different types of treatments. But even through the ups and downs, he still manages to find a way to cope with it all and stay upbeat.

Marlin talks about how important the support of his wife and son, as well as his friends, has been to him. “My son actually checks in with me every day, wanting to know how I’m feeling. And if I need anything,” he says. “And, you know, that’s kind of a good feeling.” The other thing that keeps his mind off of his treatments is his new grandson. 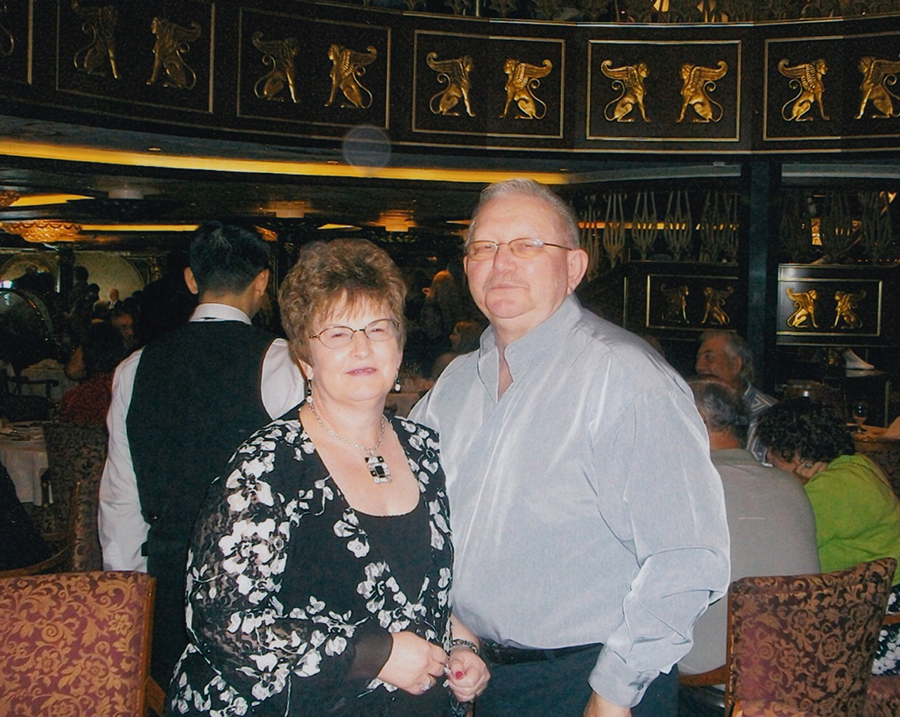 Staying active, even when you don’t feel like it, has also helped him. “The busier you keep, doing different things, like volunteering at the Veteran’s home, the better”, he says. He adds that it helps to stop him from dwelling on himself. “Sitting around in a chair, is not the thing to be doing,” he adds. “When I first started doing these treatments, I was probably sitting in that chair, because I was so tired and run down. But even if you’re just sitting down playing cards with somebody or doing something, you’re not sitting there dwelling on your problems. It doesn’t do you any good.” He enjoys his time with his friends and manages to keep his sense of humor. “We try to talk about solving all the problems in the world,” he chuckles. “But I don’t think it will happen.”

Tying to stay positive when you’re dealing with cancer isn’t always that easy. But, as Marlin points out, what’s the alternative? “Try not to worry about it. Just live your life to the fullest. I’ve had a good life. Even though I’m going through cancer, I tried to stay positive and I’ve enjoyed every day of my life.”