Getting Through Stage3 Hodgkin Lymphoma

Lymphoma is a type of cancer that begins within the blood. The two main types of lymphoma are Non-Hodgkin and Hodgkin disease, which is a much less commonly diagnosed form of this cancer. In fact, most cases of Hodgkin lymphoma are more likely to occur in men, rather than women, and often affects younger males between the ages of 15 and 40. 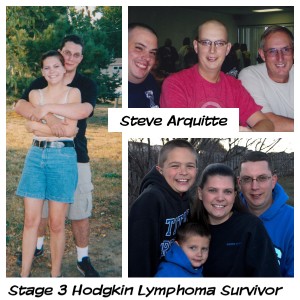 In this video, Steve Arquitte talks about his stage 3 Hodgkin lymphoma diagnosis and what it was like to go through the cancer treatment, particularly as a young man of 31, who was married and raising a family.

Because of his age, Steve never suspected that his chronic cough might have been a symptom of something more serious, instead of what he believed was just a reaction to spring allergies. When his cough worsened, to the point where he’d throw up from coughing so much, he sought medical attention, realizing that maybe it was related to something other than a lingering, seasonal allergy.

Over the next three weeks, Steve had to meet with various doctors, who weren’t really sure what was going on. He even met with one physician,who was an infectious disease doctor.  During this period, his coughing continued. Luckily, one of his doctors had ordered a blood test, which showed that Steve’s blood count numbers were completely off. His doctor called Steve, who was a work, and told him to get himself to a hospital immediately.

At the hospital, Steve was met by oncologist who informed him that he had stage 3b Hodgkin’s lymphoma. Steve was stunned by the diagnosis. He was too young and he didn’t have any symptoms that he believed could be cancerous.  “It had just started with a cough,” he recalls. “It wasn’t anything, there wasn’t a bump, it was just a cough.”

Read Steve’s story to learn more about his journey through Hodgkin lymphoma. You may also find more information about lymphoma on our website.