Getting through cancer can be tough. Going through it three times is really tough. But that’s what Faith Stevenson is. She’s tougher than cancer.

Before she was diagnosed with breast cancer, Faith owned both a tow truck business and a restaurant. A non-stop, go-getter, she was too busy to make time for cancer. 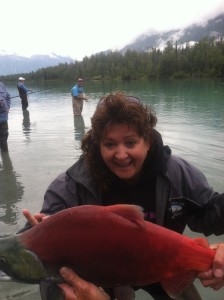 She noticed what appeared like a blister on her breast and called  her gynecologist, who asked her to come in for a mammogram. When the mammogram results showed that everything seemed fine, Faith asked her doctor if they could just skip her upcoming PAP test.  She reasoned that she’d been fine for almost three years, her mammogram results were good and she was just too busy with her existing tow business and her new restaurant. Luckily for Faith, her doctor insisted that she had to come back.

And when Faith did go back for her PAP test, her gynecologist noticed that the blister on her breast still had not healed. She asked Faith to see a specialist and to have a biopsy taken. Following the biopsy, Faith met with her specialist to go over the biopsy results. Faith remembers sitting in the doctor’s office, anxiously watching the time go by. She was in a hurry and needed to get back to her restaurant to take over for one of her waitresses. When she finally got to sit in her with doctor, she expected to get verification that her tests were alright.

But when her doctor told her that she had breast cancer, she punched him, thinking that he was joking. Her recent mammogram results had shown that she was OK, so she couldn’t have cancer! “You must have seen somebody else’s results. It wasn’t mine. I’m fine,” she told him. But when the doctor handed her the biopsy results, it confirmed that Faith had invasive ductal carcinoma, the most common type of breast cancer.

In her video, Faith talks about the other bumps in the road that followed, like her needing a hysterectomy following her cervical cancer diagnosis, having breast surgery, as well as having breast reconstruction therapy.

Faith is now over two years cancer free. She no longer has her restaurant, just her tow truck company. Between her business and her family, Faith is still on the go-go, but she always manages to make time in her busy schedule for her scheduled check-ups.

Learn more about having a mastectomy vs a lumpectomy.