Male breast cancer survivor Rick Gough never in a million years thought that his routine visit to a dermatologist would eventually lead to a breast cancer diagnosis and his journey through cancer treatment.

Four weeks before he met with his dermatologist, Rick was showering and noticed that his left nipple was inverted. He hadn’t noticed that before. It was strange, but he experienced no pain. There were no lumps. “I couldn’t feel anything associated with it other than it was inverted,” Rick recalls. He thought it was odd, but it didn’t seem to merit having anyone look at it immediately.

The Breast Cancer Diagnosis
He began to monitor the area more closely thereafter and noticed some drainage, which would crust around the nipple area. But, again, there wasn’t much inconvenience, as he’d get into the shower the area would wash off with no pain or discomfort.

About two weeks later, Rick noticed the crustiness around the nipple was not washing off. Then he tried to scrape it off. And that’s when he noticed some pain. “It was like trying to pull a scab off something. It just pinched and hurt, and didn’t feel right,” he says.

When Rick did visited his dermatologist for a scheduled appointment, Rick remembers his doctor asking him “Well, how’s everything been for the last year? Any changes?” When Rick showed him the recent changes, his doctor told him that they were going to need to do a biopsy to see what was going on.

“I’m anticipating that it’s skin cancer or something of that nature,” Rick recalls. When the results of the biopsy came in a couple of days later, his doctor had a good news, bad news scenario for him. “Good news, it’s not skin cancer. Bad news it’s invasive ductal carcinoma,” is what his doctor told him.

Going Through Breast Cancer Treatment
Following the initial diagnosis from his dermatologist, Rick met with an oncology surgeon, who after more tests, performed a full mastectomy 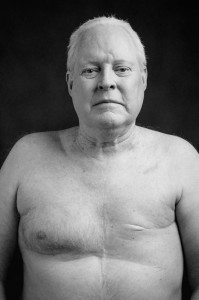 surgery, including all the lymph nodes beneath the arm.

Shortly after the surgery, Rick’s lab reports offered some good news. All the fringe margins were clear. “They’d gotten everything. As far as surgically, as one could tell, I was clean a that point and was cancer free.”

While the surgery seemed to take care of the breast cancer, Rick met with his medical oncologist to discuss any follow up preventive treatments. It was determined that he would follow up surgery with six sessions of chemotherapy, taking Taxotere and Cytoxan, spread out every three weeks over an 18 week period. 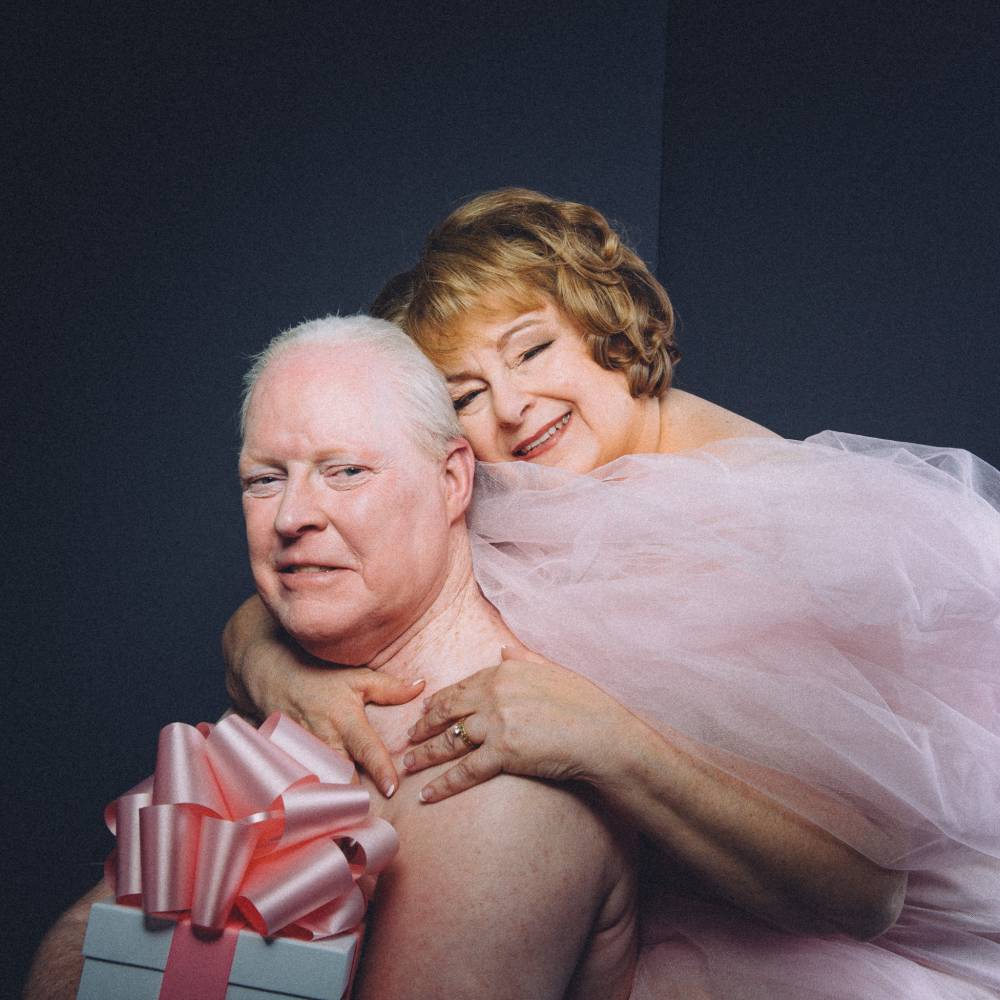 Looking for Answers
Shortly after being diagnosed with breast cancer, Rick recalls getting onto his computer one evening and just looking for other information. After about two hours, he shut the computer off and laid down on the couch, falling asleep. About an hour later, he woke up, bothered by what he had read. “Everything I was reading was just running rampant through my head,” he says. Rick came to the conclusion that he might be better off not digging into too much of the information he found on the internet. “I stayed away from blogs after that,” he laughs.

Instead of the internet, he found it more beneficial to talk to a family friend, who had gone through breast cancer a few years before. In fact, when Rick told her his diagnosis, he learned that her cancer had been the same. “She had some experience with having taken the Cytoxan and was able to give Rick a better idea as to what to expect. She had gone through much of the same process that Rick was about to go through. “And it gave me a lot of comfort that there is a life on the other side of it,” Rick says. 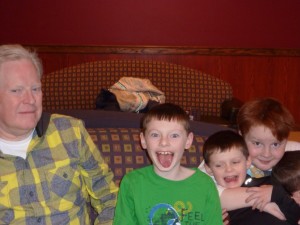 Rick recalls losing a bit of sleep before his first chemotherapy session. “The first day in I was scared, anxious about it, I probably didn’t sleep very well the night before because I didn’t know what to expect in the way of side effects,” he says. “But the office and staff were just absolutely great in terms of reassuring me,” Rick adds. He remembers them telling him that for what he was about to take they had medications to help with any bad side effects he might experience. “And they were right. They were able to do that,” says Rick who did take some anti-nausea medications. “They put the anti-nausea medication in first and then we started one bag of one or the other of the medications and then with finished up with the other one.” His chemo treatment days were long days. Rick remembers starting his chemo treatments around 9:30 or 10 in the morning and finishing up at about three or four in the afternoon.

Besides some nausea, Rick experienced some other side effects like some bone pain, fatigue and loss of appetite due to a loss of taste. “I described to my wife this is either dirt or sand, but I can’t tell what it is. That didn’t do a lot for our relationship, because she’s always been a marvelous cook” Rick says.

During this period, Rick notes he’d lose about 10-15 pounds. Because he couldn’t taste the food, nothing tasted good, so he just didn’t each much, eating just enough to get by. “And then about the beginning of the third week, the taste buds would come back and then I’m ravenous,” he says. “I’d eat everything and three times as much of it as one should normally eat.” By the time Rick headed back into the office for his next round of chemo treatments, he usually wound up being only about five pounds lighter since the last session. “Wish I could have kept it off, it would have been nice,” Rick laughs. 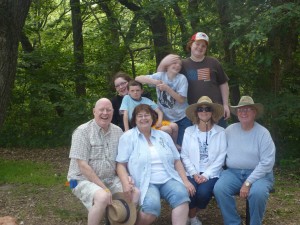 Rick was told that he’d probably lose hair as another side effect from the chemotherapy. “I said that’s fine, there’s not a lot there anyway,” says Rick, who called his son to bring his hair shaver. Rick didn’t want his grand kids to see him without clumps of hair, so he asked his son to have the honor of shaving him. “It was probably a little hard for him to do it, but at the same time, it was okay for him as he was in control instead of something else happening.”

While Rick did suffer through some of these side effects from his chemotherapy treatment, he believes that his cancer treatment was probably harder on his wife Sandy 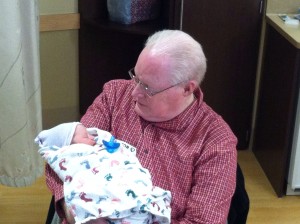 and his family. “I think the whole process was tougher on family than it is on the patient, because I’ve got medications and things I can take to help me get through it,” Rick says. “They are going through the emotional roller coaster. I’m just doing some work, so in some respects for me it was far easier to be a patient than it would be to be a family member. They were all bothered in their own ways. And…and nervous and anxious about it. But I think that they got through it.”

Radiation Therapy
Once Rick completed his chemotherapy treatments, he started going through radiation, taking thirty-six treatments in total. Five days a week. Again, Rick recalls the experience of the treatment as being not bad overall, other than some of the typical side effects like changes to the skin. “I’m fair skinned, so it doesn’t take much to burn the skin, and we got through that with minimal impact on the skin.” Even then, Rick points out that there were a lot of ointments and creams that helped reduce any of the skin irritations.

The Paradox of Cancer 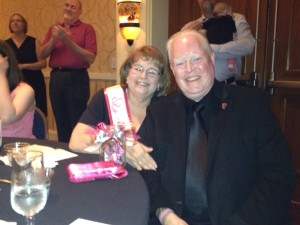 Rick discovered that his journey with cancer gave his life some clarity that he didn’t expect to find. “It’s been a real experience, not that I’d want to go through it again, but I’m glad that I had the opportunity to go through it,” he says. “You can drive up and down the road on Dodge Street and you see this building and you don’t know what’s going on inside, and when you do there’s this whole area where people are receiving their chemotherapy. ”They’re really doing some hard work in there and it gave me an appreciation for how much everybody struggles to battle this disease.” Rick soon experienced the camaraderie and the genuine concern of his fellow patients, who looked after one another, like one big, extended family. “You could tell from them, they were all equally concerned about how I was doing, as I was of them,” Rick says. He mentions that if it hadn’t been for his cancer he would have missed out on meeting a lot of great people. 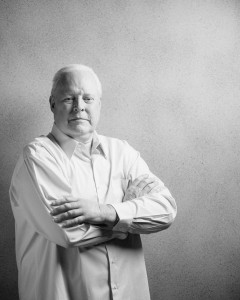 you. During his treatment, Rick learned that many members of his health care team had either personally gone through cancer themselves or had close family members who had gone through cancer.“They’re very passionate about their work. And they’re very sensitive about it in terms of how you as a patient feel.” So, in a way, cancer for Rick had a way of bringing the best out in people and bringing them together. Rick shares more on how his cancer provided him with a better appreciation for the love that surrounded him in this breast cancer survivor video.

Men Need to Be Aware of Breast Cancer
“Just because you’re a man, you need to check yourself,” says Rick. “Make sure that there’s nothing strange going on. No lumps or bumps, or whatever. No pain.” Rick says it’s important not to ignore the signs. “one of the common signs of breast cancer is an inversion of the nipple, don’t ignore the signs.”

“There’s nothing that’s going to be so terrifying that you can’t get through it. You’ll get through it and it’ll probably end up being easier than you think.” “If you think you’ve got a problem and you ignore it, it’s not going to go away. It’s only going to get worse. Your odds rapidly diminish if you don’t address it quickly. Get it early, no matter what.”

One in eight women in the United States are diagnosed with breast cancer every year, but breast cancer does not discriminate. It also affects men. While the odds of a male getting breast cancer are very low, men still need to be aware of it and how to properly screen for it.

Find more information on being diagnosed with breast cancer.