From the HER2-positive breast cancer diagnosis to the lengthy chemotherapy treatments, the many chemo side effect and the double mastectomy, it’s been a long haul for Christine on her journey to recovering from breast cancer. Along this journey, during the most painful times, Christine still found a way to maintain her sense of humor.

“When I was sick, the biggest thing was always trying to laugh,” she says. “Even at the worst, feeling as awful as I can feel, I will always try to make someone else laugh, or make myself laugh,” Christine adds. For Christine, laughter really was the best medicine. “Have friends around that will be upbeat and want to make you laugh and smile, that’s the biggest thing,” she recalls. And she found laughter from different sources, such as her oncologist from Oncology Associates. “He just tries to keep you laughing,” she says. “It’s great, as that’s hard to find,” she points out and adds, “I can’t imagine going through this with any other person in the world, he’s been fantastic.” 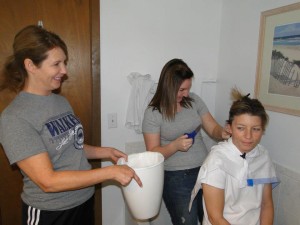 When Christine began losing her hair from her chemotherapy treatments, she used her humor with her family  to make the best of the situation “We had a party at my house to shave my head,” she recalls. She had her immediate family members in attendance, as well as her daughter in Chicago, who was a virtual attendee, Skyping from her computer.”I started making references, while my head was getting shaved, to Les Miserables,” Christine says. Christine began singing and then her daughter Mattie, from Chicago, started playing the song. “It was just ridiculous and silly, and we had a blast,” she recalls.  While the hair loss did become a bit of shock, Christine showed her fine humor by stating one advantage. “I didn’t miss the nose hair and I didn’t miss the hair anywhere else on the rest of my body. That was totally great.” 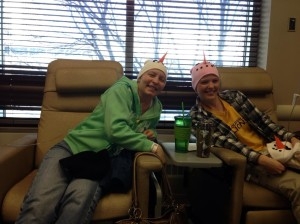 Perhaps the place that Christine found the most laughter was with the other cancer patients she met in the chemo room. She made a lot of friends in this room. “I tried to make people comfortable and have fun,” Christine says. “Even though it’s awful what we’re doing, there were times when we really had a good time,” she remembers.

Now that her journey with cancer is over, Christine is thankful for the support she’s received over the course of her cancer treatment, including her family and her health care team. And  she’s especially thankful for the strong friendships she made in the chemo room and for the camaraderie she found there. Christine is quick to point out that while her cancer treatment may be over, the friendships she made in the chemo room will continue.

Learn more about lumpectomy vs. mastectomy.