What is Prostate Cancer?

What is Prostate Cancer?

Prostate cancer is the second most common form of cancer for men, with skin cancer being the most common. While the disease is common, and only affects men, the good news is that it can be treated successfully with various cancer treatments. In fact, there are currently over 2 million men who are prostate cancer survivors just in the United States and about 9 out of 10 cases are found in the early stages.

In order to get a better understanding of prostate cancer, it helps first to understand more about the prostate (functions) and its location in the body. The prostate is gland which is situated just below the bladder and in front of the rectum.

Benign prostatic hyperplasia (BPH)
BPH is one condition that men may experience that is actually not related to prostate cancer. This condition leads to men having difficulty passing urine. The inner portion of the prostate continues to grow as men get older, which can lead to the prostate tissue pressing on the urethra, the tube that goes directly through the center of the prostate, carrying semen and urine out of the body through the penis.

Prostate Cancer Types
More than 90% of diagnosed prostate cancers are an extremely slow growing form of prostate cancer, referred to as adenocarcinomas, which begins in the gland cells for the prostate. While this is generally a slow growing 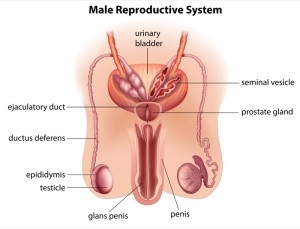 Race or Ethnicity – African American males are more than twice as likely to die of prostate cancer than white men, while Hispanic/Latino and Asian-American men are less likely to be diagnosed compared to white males. Currently, the reasons for these differences is still not clear.

Geography– Cases of prostate cancer are most common amongst men in North America, Northwestern Europe, the Caribbean and Australia as compared to men living in Africa, Asia, South or Central America.

Gene Changes – While this risk will only account for a small percentage of cases, some men may have a greater risk of getting the disease because of inherited gene mutations, such as BRCA1 or BRCA2 genes. While these genes raise the risk for women to get breast and ovarian cancers, these gene mutations may increase the risk for some males to get prostate cancer.

Diet – Some research has shown that men who eat a lot of high fat dairy products or red meat have slightly higher risk of getting prostate cancer. These men tend to eat fewer fruits and vegetables, as well. 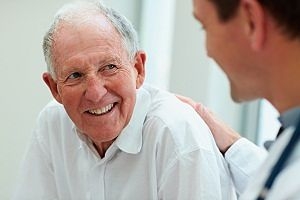 Prostate Cancer Screening
Without experiencing any symptoms, screening for prostate cancer can be found early by testing the levels of prostate-specific antigen (PSA) in a man’s blood. Another option for screening is the digital rectal exam (DRE), where a physician puts a gloved finger into the rectum to feel the prostate gland. If either one of these two tests provide abnormal results, further testing may be required to determine if there is a cancer. Currently, government guidelines do not call for routine testing in men at any age level.

Should prostate cancer be found via the PSA or DRE screenings, the cancer will most likely be a more treatable stage (as it will be found earlier), compared to if no screening had taken place.
While screening can help find prostate cancer early, there are still both pros and cons to the prostate cancer screening tests in use today. Often the tests used to screen for prostate cancer may find cancers that grow so slowly that existing medical treatments would offer no benefit. Also, some of the cancer treatments, listed below, may have serious side effects.

The American Cancer Society advises that men discuss the possibility of screenings with their doctor if they are 50 and at average risk, age 45 if they are at high risk (such as African Americans or those who have had a father, brother or son diagnosed before age 65 or age 40 for men who have had more than one first degree relative diagnosed at an early age.

Symptoms of Prostate Cancer
Generally early prostate cancer causes no symptoms, compared to more advanced prostate cancers which may offer some of the following symptoms:

While these symptoms may be a result of conditions other than prostate cancer, please let your doctor know if you have any of these problems to help find the cause and treatment.

Diagnosing Prostate Cancer
Should your doctor suspect prostate cancer exists, they discuss any symptoms you may have (urinary, sexual problems or bone pain), as well as for how long you have experienced these symptoms. Your examination 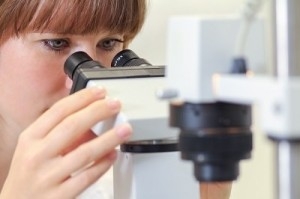 may include a digital rectal exam (DRE), to feel for any bumps or hard areas on the prostate. Should cancer be evident, the DRE may help determine if the cancer is on side of the prostate or if it is on both sides, which would suggest that the cancer has spread to nearby tissues. Another test may involve the PSA blood test. While this test is generally used to screen for signs of an early cancer in men without any symptoms, it is one of the first tests done in men who have symptoms possibly attributed by prostate cancer.

Prostate Biopsy Should symptoms or early screening tests suggest prostate cancer, your physician will perform a biopsy procedure to find more information. A biopsy involves taking multiple samples of tissue between the rectum and the scrotum and examining these under a microscope. Taking a biopsy is the best way to verify whether a cancer exists, as well as predict whether the cancer is aggressive or slow growing.

Additional Testing for Prostate Cancer
Some men may require additional testing to determine whether the cancer has spread beyond the prostate. These tests may include CT-scan, ultrasound or an MRI. 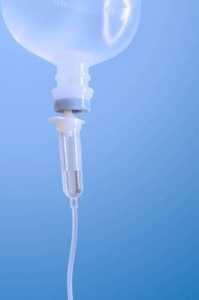 Prostate Cancer Treatments and Side Effects
Low-Risk Prostate Cancer- For men who have been diagnosed with low-risk prostate cancer, one treatment option is to wait and watch. So how is low-risk determined? Usually by the patient’s biopsy results or their PSA test.If a patient is deemed to be a low risk, their doctor will order periodic testing and examinations. Some men who are older or have existing, serious health conditions may not need treatment.

Higher-Risk – For younger men or those who have a more aggressive form of the cancer, some of the following cancer treatments may be suggested:

Radiation Therapy – Two forms of radiation treatment that may apply. One is external beam radiation, which may be used as either a first treatment to kill cancer cells, or following prostate cancer surgery. Brachytherapy is another form of radiation which may be used to help patients relieve any bone pain from the spread of their cancer. This treatment involves inserting tiny radioactive pellets, roughly the size of a grain of rice, into the patient’s prostate. Possible side-effects of either form of radiation therapy may include impaired erectile function, fatigue, urinary problems, or diarrhea, as well as other side effects.

Surgery – Removal of the prostate may be used to treat the cancer if it is confined to the prostate. New techniques use smaller incisions and try to avoid damaging nearby nerves. Possible side-effects may include impaired urinary and sexual function but both can improve over time.

Hormone Therapy – This treatment may be used to shrink or slow the growth of the cancer but it generally combined with another treatment option, as it will not eliminate the cancer on its own. Hormone therapy uses drugs or hormones to stop or completely block the production of male hormones such as testosterone. Possible side effects may include hot flashes, growth of breast tissue, weight gain and impotence.

Chemotherapy – Generally used to treat more advanced cancers, as well as cancers that did not respond to hormone therapy. Chemotherapy treatment will go after cancer cells throughout the patient’s body, including those outside the prostate, as well as healthy cells, which may cause various side effects like hair loss, or mouth sores. Other side effects may include nausea, fatigue and vomiting. Besides general chemotherapy treatments, there are also targeted cancer treatments that “target” cancer cells while doing less damage to healthy cells. An example of such a treatment would be the prostate cancer drug Xofigo.

Life After Treatment
Once treatment is completed, your doctor will continue to monitor your PSA levels, as well as any other possible tests. Should the cancer recur or spread into other areas of the body, additional treatment may be recommended. On a positive note, studies have shown that a patient’s lifestyle choices may matter for becoming a prostate cancer survivor, as those who exercise more regularly had a greater chance of surviving.